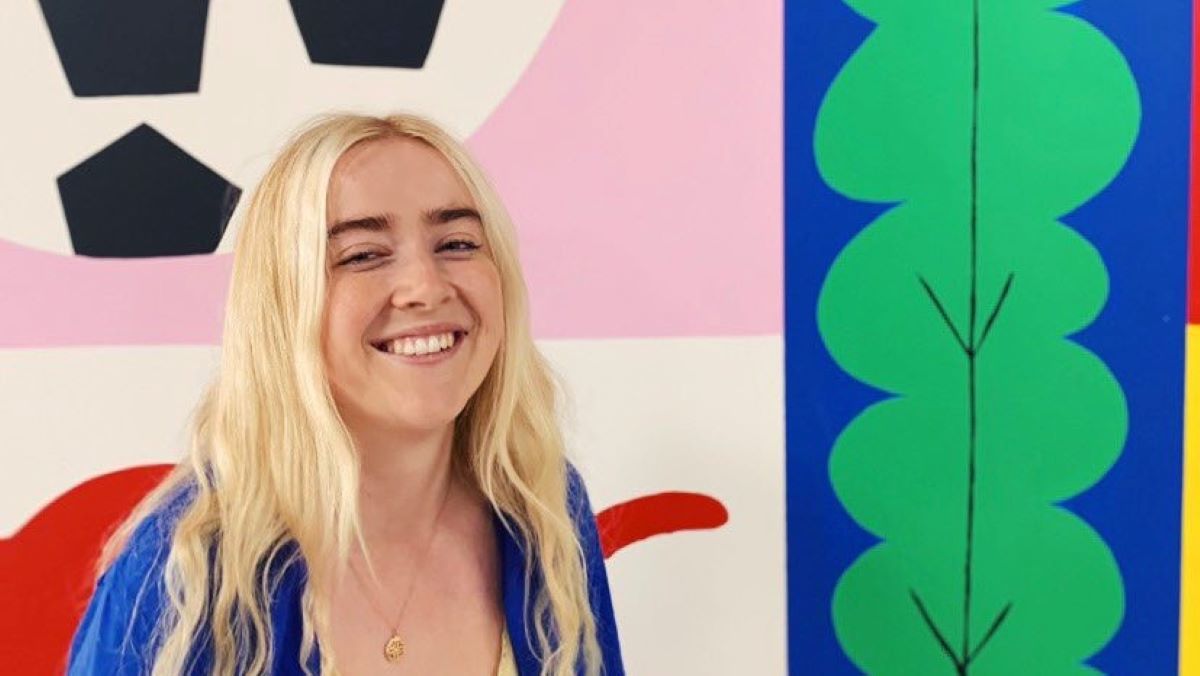 Bristol-based Ana Jaks is an award winning illustrator and mural artist with a love for shape, colour, pattern and inclusivity. Her vibrant, eye-catching style has seen her collaborate with everybody from Facebook and Nike to John Lewis and HiPP. We grabbed some time with her to chat about her creative process and her plans for the future.

How did you get into illustration and murals and what do you enjoy about it?

My interest in illustration wasn’t exactly organic to begin with. I’d made the decision to study fashion at university, but a couple of my tutors pushed me into illustration because they were convinced I was good. I kind of just went with what they suggested in the end, even though I had absolutely no idea what illustration really was. I struggled to begin with and wanted to drop out so many times because I never felt I was good enough. Even after a full year of study I wasn’t “into” it. AND THEN, someone showed me Anorak Magazine, and after that I found the Young Colossus project illustrated by Robert Hunter in collab with Orlando Weeks’ music. Those two things really started my love for illustration and after that it just kind of snowballed.

My favourite thing about illustration is the way you can be great at drawing, and so can somebody else, but your styles will be completely different and neither way is wrong! I hated art in school because realism was pushed and I just couldn’t draw like that/didn’t want to.

Drawing always felt natural, but painting never did, and up until my first mural in 2017 I rarely picked up a brush. I think I was just desperate to learn new skills and see my work big, so I started contacting people to see if they’d like something painted – even though I had virtually no experience. Facebook let me paint a SeeSaw for the House of Us event I’d created the visual identity for and I just fell in love. The biggest mural I’ve painted now is almost 10 metres! It’s great being able to create something away from a computer screen and have the public come up and speak with you about what you’re doing – though it’s super exhausting being stood up for that amount of time!

I still start all of my sketches in pencil in a sketchbook. Usually they’ll begin super loose, just so I have an idea of shapes and composition, and from there I draw bigger, more accurate drawings. After that, they’re put straight into Photoshop and I have a huge mess around with colours. Depending on the piece, sometimes it’s better for me to decide on a palette prior to the sketch stage so I can draw with complimentary colours in mind – especially for illustrations that are pattern heavy!

You’ve got a wide range of clients. Is the diversity of the work something that you enjoy?

Yeah, it’s kind of mad! At university we were all pushed into either picture book illustration or editorial, so I really tried to tailor my portfolio to the latter. Initially, most of the work I got was editorial, but now not so much. I am so thankful for all of the clients that have envisaged my work in different contexts; never in a million years did I think I’d get a packaging brief – it was a dream! It’s been great having such a diverse selection of work come in, but I have to admit my favourite projects are the visual identity/ad type ones. Something I’ve always loved about illustration is the ability to get people to stop, smile, laugh, etc., and those jobs give me the chance to do just that.

It’s also great knowing that clients feel as though my work can be applied to lots of different briefs. I’ve just finished a narrative project that’s definitely felt like the most challenging thing I’ve done, simply because it’s an area of illustration I’d never considered before.

At the same time, you have a defined style. How much flexibility is there if a client asks you to change colours or shapes?

I’m totally flexible on colours. When I first graduated I tried to keep to my palette as much as I could, because I was under the belief that more people would recognise the work as mine. While I do think there could be some truth to that, I started to feel slightly restricted by it. It’s great being asked to produce something in different colours as it adds to my portfolio and allows both me and my audience to see that it can work in lots of different palettes.

Shape wise, I’ve not had that come up yet. I think the way I use shapes is integral to my character illustration, patterns and all-round style. I’m always open to new ideas, but I’m just not sure whether it’d be ‘me’ if the shapes changed completely!

What’s been your most challenging project to date? And the one you’re most proud of?

The most challenging definitely feels like the narrative project I mentioned earlier. It’s not like the rest of my portfolio – it’s more serious. In March I was invited to work with an agency in Bogota, Colombia – Poliedro. I was flown out there to meet a group of vulnerable children who’d written stories about being affected by drugs, violence, types of crime and how environmental changes are impacting their lives. I had to sit and listen to these children’s stories with a translator, trying to write down notes while also crying my eyes out because what they were saying was unbelievable.

I’ve been working on illustrating four of those stories since, and I’ve just finished. It’s been really challenging, not just because of the emotional connection but also the responsibility you feel to do well by these kids – very hard! I’ve cried a lot!

The project I’m most proud of is probably the packaging brief I did with HiPP this year. They gave me a few key words and initial ideas, but then allowed me to come up with the concept on my own. Being given that trust and having it work out so well is amazing. I managed to illustrate everything in 2 weeks! And it looks beautiful!

Can you explain what creativity means to you and how it informs your work?

I’m not really sure. During my MA all of the tutors hated the word creative, because they thought it felt like an empty word, and often I think it is if you aren’t exactly sure what it means to you personally. The majority of my work is influenced by popular culture, day-to-day life; the clothes I like, the food I eat, the music I listen to, the conversations I have or the way I’m feeling that day. To me, being creative is emerging yourself in the things you love, learning new things, and giving yourself the time you need to rest. People like Tyler, The Creator do creativity well – he immerses, learns, escapes, creates and then ends up with a unique vision that’s this incredible amalgamation of everything he loves and is. Sometimes I feel as though people’s perception of what it means to be creative is misinformed – you don’t have to constantly be looking for inspiration, or working all hours of the day. You can only create your best work when you’re well rested. Often those few hours of down time or the mindless rides on public transport listening to the same song for the 10th time are when you get the best ideas!

Which creative people (from any discipline) inspire you and why?

Ooops! I think I answered this in my previous question! Tyler, The Creator massively.  It’s inspiring to see someone who’s so in love with their craft, continuously grow and master new skills, learn and evolve. I think in whatever creative industry you’re in, it’s important to always keep moving, changing and developing. Also, Jessica Walsh is super inspiring!

What would be your dream project?

My absolute dream project would be to have my work on fashion garments or to do an ad campaign with a fashion company. Anything to do with shoes also. I think because I’ve always had that interest and love for fashion, but never fulfilled it there’s a huge part of me that wants to break into that industry somehow. But ohhh, it is hard!